Hall of Fame (Husson, New England Basketball, Maine Basketball) head coach, Kissy Walker, one of NCAA DIII women’s basketball’s winningest coaches, the winningest coach in program history and the longest tenured head coach for a single sport in Husson University Athletics' history begins her 30th season at the helm of the Eagles basketball program and the 33rd year on the staff in 2020-21.

Walker enters the season with a 528-273 (.659) overall record and she has 291 wins since the Eagles joined the NAC - the third most wins in the league since the 2003-04 season, while developing a program worthy of the women’s basketball team’s rich history at Husson University, which headed into the 2020-21 campaign with the most victories in NCAA DIII Women’s Basketball History with a 1116-507-8 (.690) all-time record.

Over Walker's 27-year span as head coach, she has led her teams to 12 conference titles, one NAIA District V title with four appearances in the NAIA National Tournament and eight NCAA Tournament berths and on 17 occasions has earned coach of the year honors with a total of ten twenty-win seasons in her career. She also coached all ten of the program’s All-America honorees: Sharon Siebert '91, Vicki Mazerall '93, Kristi Wildman '93, Tara Leavitt '96, Sue Ann Allen '97, Emily Walker '00, Kelly A. Dow '00, Katie Nye '01, Liza Doughty '01, and Shelby Bradford '10.

Walker became the 32nd NCAA DIII Women’s Basketball coach to reach the 500-victory mark when her Eagles defeated State University of New York at Canton, 64-55, at the William P. Newman Gymnasium on January 18th, 2019. She headed into the 2020-21 season ranked 17th among active head coaches in career wins. 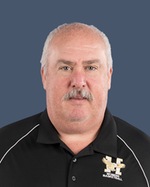 Since joining Walker’s staff beginning with the 1991-92 season, Dodge helped guide the Braves to two Western Maine Athletic Conference (WMAC) Championships in 1991-92 and 1992-93, a NAIA District 5 Championship in 1992-93, which included one historical and exciting trip to the NAIA National Championship Tournament Fabulous Four in 1992-93, during his first stint as an assistant coach.

Dodge returned to the sidelines for the 1996-97 season and spent the next five seasons coaching along side Walker until her two-year hiatus. During Dodge’s second stint on the bench, the Braves complied a 79-55 record, a Maine Athletic Conference (MAC) Championship and berth to the NAIA National Championship Tournament in 1999-00, a MAC Regular Season Title in 1999-00 and three MAC Runner-Up finishes in 1997-98, 1998-99, and 2000-01.

Dodge spent four seasons as the Husson head softball coach from 2000-03, complying a career record of 30-86. He has also served as Husson’s residential director for eight years (1994-2002). He has also coached basketball at Hampden Academy for both the boy’s and girl’s teams and was the Varsity girl’s soccer coach for thirteen seasons.

Dodge was a one-year letterwinner as a defender/goalkeeper on the Husson men’s soccer team for the 1985 season. He recorded one point (one assist) on 11 shots in 15 games played.

Dodge earned a Bachelor of Science in Business Administration with an emphasis in Sport Management from Husson in 2002. 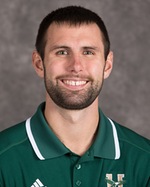 Matt MacKenzie enters his ninth season as an assistant coach with the Husson women’s basketball team in 2018-19. His responsibilities have included strength and conditioning, recruiting and developing practice plans for post players.

Prior to joining the Eagle coaching staff, MacKenzie was a four-year letterwinner as a member of the Husson men’s basketball team as a forward from 2007-10. He tallied 1,300 points, 465 rebounds, 51 assists, 73 steals and 38 blocks in 105 career games played. The senior captain helped guide the Eagles to the program’s first NAC Championship and berth to the NCAA DIII National Championship tournament in 2009, while being named the NAC Tournament MVP, and two NAC Regular Season Titles in 2007 and 2009 and a NAC Runner-Up finish in 2007.

Off the court, MacKenzie earned National Association of Basketball Coaches (NABC) Honors Court in 2009 and 2010.

MacKenzie earn a Bachelor of Science in Physical Education from Husson in 2010 and is currently pursuing his Masters Degree in Athletic Administration from the University of Arkansas.

A native of Warren, Maine, MacKenzie attended Medomak Valley High School. He and his wife, Erin live in Brewer, Maine.

Steve Waceken enters his second season as an assistant women’s basketball coach at Husson in 2018-19.

In his first season as a member of the women's basketball coaching staff, Waceken helped Husson posted a 19-10 overall record with a 14-4 mark in NAC play last season en route to earning the #3 seed in the conference tournament. In tourney play, the Eagles defeated New England College and Colby-Sawyer College in the quarter and semi finals, respectively, and toppled Maine Maritime Academy, 76-58, in the NAC Championship at Glenbrook Gym on the campus of Castleton University on February 24th and claim the program's first three-peat. In the NCAA Tournament, Husson drew eventual National Runner-up, the #3/#5 ranked team in nation Bowdoin College, but saw their 2017-18 season come to a close with a 94-32 loss to the Polar Bears.

Waceken arrived at Husson after spending the past seven seasons (2012-18) as the head junior high girls basketball coach at Stearns Junior High School in Millinocket, Maine, where he ran the Husson University women’s basketball’s offense.

He has also sereved as the head varsity football coach at Stearns Senior High School from 2014-15, guiding the Minuteman to a 6-10 overall record. Prior to being named the head coach, Waceken served as an assistant coach for 19 years (1995-13).

Waceken is currently employed at Dennis Paper & Foodservice as a district sales representative and is the owner of Rick’s Market in East Millinocket, Maine.

Lauree Gott, the most successful (.929) coach in team history by winning percentage, returns to the Eagle sidelines in 2018-19 for the first time since serving as its head coach for the 1988-89 season. The 2018-19 season will mark Gott’s first season as an assistant coach and her second on the Husson women’s basketball coaching staff.

Prior to returning to the women’s basketball program, Gott spent four seasons (1990-93) as an assistant coach at Northeastern University before returning home to coach at Brewer High School from 1994-1998.

During her time at Northeastern, Gott helped the Huskies post a 32-82 overall record, while coaching the 1992-93 North Atlantic Conference - known today as the American East Conference - Rookie of the Year.

Gott also spent 20 years teaching science at Veazie Community School in Veazie, Maine from 1995-2015. In 2014, Gott received the State of Maine’s Presidential Award for Excellence in Science and Math Teaching.

Gott was a four-year letterwinner as a forward for the women’s basketball team at the University of Maine from 1983,84-87. She tallied  1,387 points and 781 rebounds in 115 career games played, while averaging 12.0 points-per-game. The 1987 Seaboard Conference First Team All-Conference selection currently sits ninth all-time in points and rebounds at UMaine. The two-time (1986, 1987) captain helped guide the Black Bears to an 83-32 record and a Seaboard Conference - known today as the American East Conference - Tournament Runner-Up finish in 1987 during her time on the UMaine campus.

Gott earned a Bachelor of Science in Elementary Education from the University of Maine in 1987 and a Master’s Degree in Teachers of Geoscience from Mississippi State University in 2002. 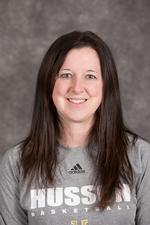 Jenn Folsom enters her fourth season as an assistant women’s basketball coach at Husson in 2017-18.

Folsom is currently employed at Eastern Maine Healthcare System as a project manager in the information systems department as well as an independent consultant with Thirty-One Gifts.

While a student-athlete at Husson, Folsom was a three-year letter winner as a forward in field hockey from 2001-04 and a guard on the women’s basketball team from 2001-04.

In field hockey, Folsom played in 40 career games and posted 34 points, while helping the Braves to a 31-27 overall mark and their first conference championship in program history in 2001.

In basketball, Folsom appeared in 97 career games and tallied 189 points, 158 assists, 133 rebounds, 96 steals and eight blocks, while shooting 26.0 percent from the floor, 23.6 percent from behind the arc and 48.5 percent from the free throw line. She helped the Braves to a 58-49 overall record and an at-large bid to the program’s first NCAA DIII Championship Tournament in 2004.

The Lincoln, Maine, native attended Mattanawcook Academy. She and her husband, Jason, who is an assistant coach on the Husson baseball team, currently reside in Glenburn, Maine with their twin daughters, Abygail and Kaylee, and son, Connor.

Liza Doughty Muth was a standout point guard and is considered to be perhaps one of the best all-around basketball players to play for Hall of Fame head coach Kissy Walker '03G because of her ability to score, play airtight defense, pass well and shoot from the outside.

She was also a true leader for the women's basketball program over her four-year career as evidenced by her serving as team captain as a freshman, as a sophomore, as a junior and as a senior. Doughty is the only player in program history to serve as team captain all four years.

During her career, Husson posted a four-year record of 66-42 (.611) and captured one Maine Athletic Conference (MAC) title in 1999, while leading the Braves to four straight MAC Championship Games. 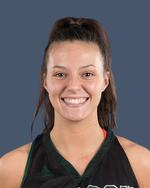 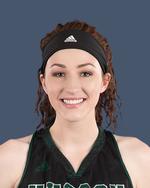 2016-17: Played in 28 games… She averaged 7.2 points per game shooting 41.4 percent from the field and 70.3 percent on free throws… She also averaged 4.1 rebounds per game named Maine Women's Basketball Coaches Association Rookie of the Week five times.